How to
Become a
better cook!

This is how we did it.
and now we’re
sharing it with you! 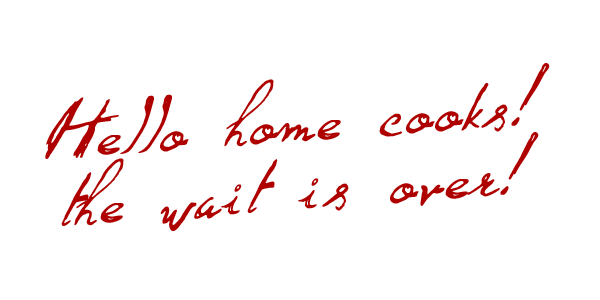 COOKING AT HOME IS FUN - VOLUME 6

How To Become a Better Cook!

Our “how to become a better cook” journey started sometime before 2014. Prior to then, we were regular restaurant visitors and had been for a while.

What’s not to love about restaurant food? Everything is done for you, it’s yummy and you don’t need to wash the dishes!

We ate out regularly…

We would visit heaps of different restaurants, usually one per week, sometimes less, sometimes more. It’s great to experience many different cuisines and cooking styles.

But after a while, we started to notice things that we hadn’t paid attention to before. Like:

Sometimes we would be fuming about paying for a meal which was not up to standard.

You’ve been there before too. And it’s not about being picky either.

Of course some restaurants were serving absolutely delicious meals too, but you know what it’s like when you get stung by bad service, it ruins the experience completely.

It can be a challenge for establishments to get the balance right.

The kitchen might be smashing it but the front of house migh be inattentive, or playing with their phones…

What made it worse was that we started to play safe by making menu choices we thought were hard for a restaurant to mess up.

This was short-lived, and after a while the same sorts of problems began appearing in these meals too.

Restaurant Mistakes Made us Better Cooks!

It didn’t take long for us to gain an understanding of where the restaurant got it wrong in the kitchen.

But rather than be sad about the quality, we would discuss the things we would have done to improve the meal.

Sometimes we would hypothesise about where they went wrong.

Like, how many minutes it was over cooked for, was it rested long enough, or whether there was enough seasoning.

We started to wonder why we kept going out to restaurants and spending our hard-earned money on food which often turned out to be sub-standard!

Then One Day Everything Changed! Getting Started Was Easy

All we did was thought about which restaurant we wanted to eat from that week, and which meal we would likely choose from the menu. Then:

We stayed home and cooked that meal — exactly how we wanted it!

Achieving delicious results immediately filled us with pride and confidence. As well as filling our tummies!

We were absolutely thrilled with the results and quickly moved on to our Asian faves like stir fries, delicious dumplings and even the ever-popular egg fried rice.

We kept cooking a new recipe every week.

We have recipes covering many different cuisines including Indian, Italian, Japanese, Chinese, African, Middle Eastern and many more.

After a while, our minds and taste buds became more curious and we saw ingredients in a completely different way.  Below you can see examples of Kung Pao Chicken, Tiramisu Cup Cakes, Jalapeño Burgers, even freshly baked rye bread.

We learned how to cook anything we want! The best thing is,

if we can do it

The fastest way to become a better cook.

Featuring page after page of simple to cook, go-to recipes to make at home! 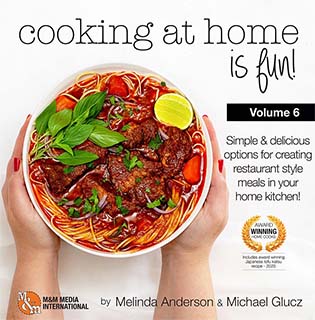 The World Inside Our Cookbooks

We share the way to make dumplings, learned from cooking classes in China and Vietnam, and the secrets we learned from this Taiwanese shop holder on our 2015 Asian travel circuit.

There are few rules in cooking
other than to love what you do!

Cooking That Never Gets Boring!

We found the secret to avoiding boredom is to insist on variety. Cooking a constant variety of meals means there’s no chance to get bored with cooking. And It’s super-easy once you get started!

We started by making a list of meals we might order while eating at a restaurant, or buying take out, then cooked the meals ourselves at home. This gave us total control of every aspect of the meal. Deciding, preparing, cooking AND enjoying!

Every one of our cooking at home is fun cook books contain sections for each of the proteins: pork, chicken, beef, lamb, and seafood.

Over 55 recipes
in every book!

Cook a New Recipe Every Week

We have cooked at least one brand new meal every week since the beginning. It has been over six years and we still love it!

Every recipe has been cooked over and over to create the easiest and most delicious version possible. Our recipes are simple enough for anyone to try.

For those who prefer to flick through a book, a special selection of our recipes is available in our range of printed cookbooks.

Learn The Secrets of Spice

Choosing the right spice can be daunting! But our simple recipes make it easy to spice up your dinner time.

We travelled the spice trail through China and learned the simple way to pair spices for any cuisine.

Our books share many interesting facts about spices and where they’re found.

Simply knowing where spice originates is one key to understanding flavour.

Did you know “Garam Masala” simply translates to “Hot Mix”?

We found experimenting with different cuisines and meals to be such a joy that the question of how to become a better cook wasn’t a conscious thought!

Experimenting in the kitchen took things to a whole new level!

For example: The simple act of swapping peanuts for cashews in a satay sauce brought something deliciously different to the table. It’s not rocket science — it’s about learning to be brave in the kitchen!

Do you enjoy Japanese food?

We have some deliciously simple Japanese favourites that punch well above their weight in the flavour department.

Many of our meals can be made in less than 30 minutes. Some are on the plate within just 15 minutes.

This Yakitori Chicken is so delicious, it needs TWO skewers!

This one is taken from the Cooking at home is fun Volume 4 cookbook.

It’s all about the food!

With food as our focus, we set out to learn how to cook delicious restaurant style food by taking cooking classes, personal research, and heaps of kitchen experiments.

We share our recipes and results in our 5 volume cookbook series.

The Great News Is:

Our cookbooks show you the most simple way to cook delicious meals to rival the best takeout you used to pay for!

Super easy to make Bunb Ga Nuong is a DELICIOUS gift to your mouth. Vietnamese food has to be some of the most flavoursome and aromatic food you will ever eat and we show you have to cook it now
You can cook this in less than 30 minutes – let us help!

Recipes from around the world!

These Lajiao Jiaozi are jam-packed with FIVE kinds of mushrooms and spicy Lao Gan ma Sauce. There’s not much else to say, except to form a queue!
You can cook these – believe it!

Chocolate Cake
with Strawberries
on Top

Cooking at home is fun Volume 4 includes this wonderful classic chocolate cake with strawberries. You may have found your next super simple “go-to” cake for the next “special occasion!”
You can make this – believe it!

Crispy Chilli Beef from Cooking at home is fun Volume 3. It’s a favourite Chinese dish all around the world. Now you can make this YOUR signature dish from your own kitchen!
You can make this – believe it!

Home cooks often avoid cooking fish — unless it comes battered in a box from the freezer! We take away the mystery of how to cook real fish so you can enjoy it even more quickly than ordering take out!
You can do this – Let’s get started!

Cook what you want – when you want!

The Chinese Ma Po dish is usually served with tofu, but we have gone out on a limb here by adding chicken! The totally wonderful Szechuan chilli style dish has been re-thought and we have added a secret ingredient! – And we’re proud to say, it won an award!
You will love this one too – Let’s get started!

We’re thrilled to share our award-winning recipes with you! Our books have something for everyone and are available worldwide, grab your copy today! Our books are the fast way to create
super-delicious restaurant style
meals in your own home!

Hurry, our discounted prices
are for a limited time only!